Whenever Hollywood attempt to adapt a biblical story for the big screen, the church is very apprehensive. Whenever the church attempts to review a hollywood movie hollywood is apprehensive. What we have then today is the confluence of two opposing worlds, a hollywood production of a biblical text being reviewed by a Pastor who happens to be a movie geek too. Yes, this movie reviewer is not your average christian Tyler Perry movie watcher, I am a movie geek. I not only watch a lot of movies, but follow a lot of blogs (Latino Review*), news sites (Screen Rant*), studio execs (Kevin Tsujiara and Kevin Fiege *) , movie directors (Zack Snyder*), directors of photography (Larry Fong*), movie score composers (Hans Zimmer*), podcasts (Schmoes Know*) youtube channels (AMC Movie Talk*) etc. I have my finger on the pulse of Hollywood, and know what is current and what is coming. This review is not from an archaic preacher with antiquated views that are steeped in religion, and sees the illuminati in everything.I am a genuine movie enthusiast who loves movies in general and will give my take on this movie. 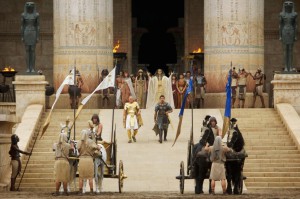 1. Epic Visuals. Visually this movie was stunning. Ridley Scott  who of late has been a hit or miss director ,has made many classics (Alien, Blade Runner, Thelma and Louise and Gladiator) and this was him going back to his Gladiator roots. He showed us Egypt on a level that we have not seen before. The visual experience was breathtaking, from the battles, to the 10 plagues to the Cities of Memphis and Pithom they were simply epic. In this department this movie cannot be faulted at all.